4 Facts You Didn't Know About Eastbourne

Learn something new about the UK's sunniest town!

4 Facts you Didn't Know About Eastbourne

Eastbourne is a beautiful town on the south coast of England, and the location of one of our English Centres. Originally named after its location near a stream by the Anglo-Saxons, in this blog we’ll explore some things you might not know about the town.

While Eastbourne itself got its name from the Anglo-Saxons, the town actually has history predating it.

Stone Age artefacts have been discovered in the countryside areas surrounding the Eastbourne Downs, and it is believed that there were Celtic people living in the area in around 500 BC.

There are also Roman remains that have been found under the town. A Roman bath and a section of pavement have been unearthed near Eastbourne Pier. There are also the remnants of a Roman villa nearby the present-day Queens Hotel.

In 2014, the remains of a skeleton were found near Beachy head, dating back to around 425 AD. It was first believed that the skeleton came from Sub-Saharan Africa, but later testing suggests that the 30-year old woman actually came from Cyprus. 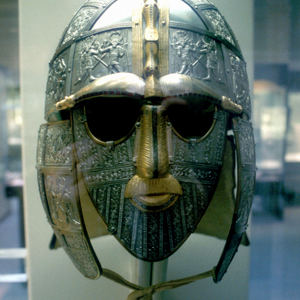 Eastbourne is one of the most well-known beaches in the UK, with the Independent rating it fourth most popular in 2019, beaten only by Bournemouth, Weymouth, and Portsmouth. It’s even the sunniest place in the UK!

The seafront at Eastbourne is arguably one of the most important parts of the town’s economy, with almost 5.5 million visitors annually. These visitors spend £530 million every year, and tourism actually supports 28% of all jobs in the town.

The seafront is almost entirely made up of Victorian hotels. These, along with the pier and bandstand are preserved, to create a timeless look.

As well as the main seafront, the town is home to Sovereign Harbour, which is the largest man-made marina in Northern Europe. 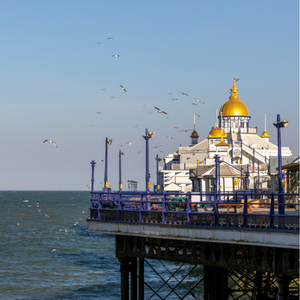 A Town of Firsts

As well as being a beautiful seaside town, Eastbourne is also a town with some surprising firsts.

Perhaps the most significant is that in 1066, William the Conqueror landed at Pevensey after crossing the English Channel, beginning the Norman Conquest of England.

However, this isn’t the only historic first that Eastbourne claims. In 1903, the ton introduced the world’s first municipal motorbus service, and in 1912, built the first seaplanes.

As well as world firsts, the town is home to many British firsts. In 1931, it was the first to install British made traffic lights, and was also home to the first roller-skating rink in the UK, located in the Winter Garden’s Floral Hall.

Eastbourne is also famous as the birthplace of British shoe brands Russel & Bromley, and Jones the Bootmaker, which can be found in shops across the country. 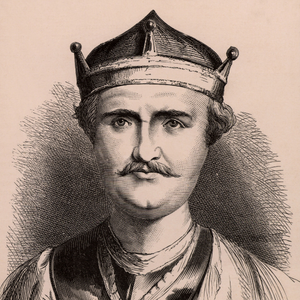 Eastbourne’s location has meant that it has been a popular destination for visits by all kind of people, and has also been called home by many others.

Several famous authors have ties to the town. Lewis Carroll, who famously wrote Alice in Wonderland used to holiday in Eastbourne, visiting 19 times, beginning in 1877. A blue plaque now shows the location of his first visit, on Lushington Road. George Orwell, another famous writer also studied at the now closed St. Cyprian’s School.

Eastbourne is also the birthplace of former UK Prime Minister Theresa May, and BBC weatherman Michael Fish, who in 1987 famously said there would be no hurricane in England, before one of the worst storms in British history hit. 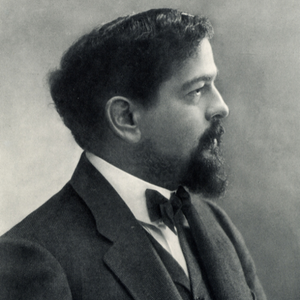 So there you go – there’s a lot more to Eastbourne than you might have thought. If you’re interested in studying English in a scenic seaside town, have a look at our website, and learn more about what we offer