5 historic places in London that you must see

Did you know about these hidden historic places?

5 hidden historic places in London that you didn't know about

The ruins of St Dunstan in the East
St.Dunstan-in-the-East is a 900 year old church that near the Tower of London. Out of sight many people will walk past the beautiful ruins of this church that is now a peaceful public garden. 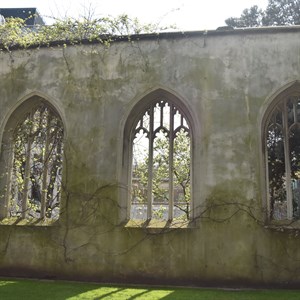 The originally built Saxon church had suffered fire damage in the Great Fire of London, in 1666. It was rebuilt by Sir Christopher Wren (the architect who created St. Paul’s Cathedral). During WWII, in 1941, a direct bomb hit the church, damaging everything but the north and south walls. Since then the church has remained in ruins and is now one of London’s beautiful secret gardens, complete with trees, grass and flowers! 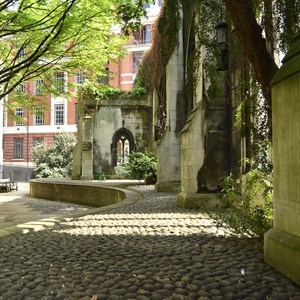 Location: St. Dunstan-in-the-East, St. Dunstan's Hill, London, EC3R 8PP.
The Hardy Tree
In a cemetery, near St Pancras International Station, there's an Ash tree, which is the Hardy tree. The famous novelist and poet, Thomas Hardy (author of Tess of the D’Urbervilles) surrounded this tree with hundreds of gravestones.
Why? In the 1860s, Britain’s rail systems were growing, due to an increasing population. Part of St. Pancras Old Church’s graveyard was needed to make a new train line at St. Pancras. At the time, Thomas Hardy worked at an architecture firm who had to deal with the gravestones and bodies. The firm reburied the bodies at a different site, but had hundreds of gravestones left. Thomas Hardy decided to put out of the way, around an Ash tree in a circle. 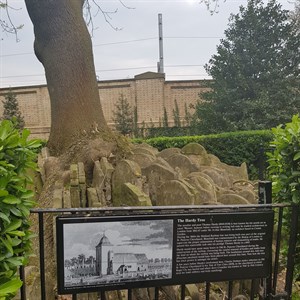 There’s poetic beauty in Hardy’s act. Over the years, the tree has been growing around many of the gravestones. Making a place where life and death come together! A map from the 1790s shows Little Compton Street connecting Old and New Compton Streets, a time when the street level was much lower. But in 1896, the area was demolished in preparation for the building of Charing Cross Road. Location: 2, Old Compton Street, Soho, London, W1D 4TA. (You can see the street signs through the metal grate that is on the traffic island. You can find this at the intersection of Charing Cross Road and Old Compton Street.)
London Wall
All around London, you will be able to find the remains of a Roman wall that, constructed around 200 AD. The wall was once 2 miles long, bordering Tower Hill (in the East) up to Blackfriars Station (in the West). Today, a lot of the remaining ruins of the wall aren’t marked and parts of the wall have since been built upon. But there are fantastic parts of the wall that the public can see. For example on London Wall Road a part of the city that follows the same path as the wall. You can also see the parts of the wall at Cooper’s Row, Tower Hill and other places. Find out more about the Roman Wall and where you can see it here. (I went to Copper's Row, which is opposite the Tower of London.) Location: London (see the above link).
Leinster Gardens False Facades
To the eyes of a passer-by, these buildings look like their neighbouring houses. Yet, these are not houses; proving that you should never judge a book by its cover! In the 1860s, the London Underground was being built. Instead of tunnelling under buildings, deep tunnels were dug through the city and then covered up again. But not all the properties were rebuilt, leaving a large hole on Leinster Gardens. So, a fake house was built. It matched its neighbours in every detail and from the outside it looks as though it is a lovely home. 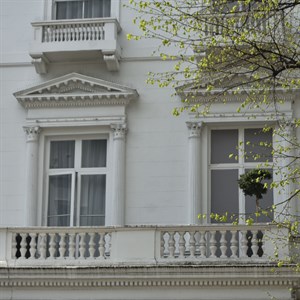 It’s only when you look round the back of the house that you can see that the house is held by some metal struts. You can see the Underground tracks, where they left the underground open to allow ventilation into the tube system. 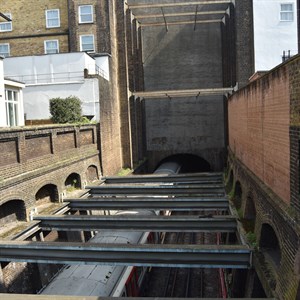