Find out what the Poppy Appeal means

Why do we wear the poppy?

Out and about this past couple of weeks you might have noticed people wearing a poppy on their jackets. This practice has become ingrained in British heritage, but if you aren’t familiar with our culture it’s perhaps not obvious what the poppy stands for.

The organisation responsible for the ‘Poppy Appeal’ is The Royal British Legion, a charity which supports members and veterans of the British Armed Forces. Funds from selling poppies are used by the charity to provide welfare initiatives including rehabilitation, employment aid and independant living.

The charity also organises campaigns and remembrance activities. It is this last point - remembrance - which expresses the core of the Poppy Appeal. Wearing the poppy is intended to help help us respectfully remember the the British service men and women sacrificed for our conflicts, while also commemorating those still serving. 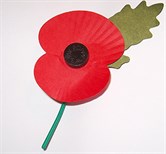 The imagery of the poppy was inspired by the poem ‘In Flanders Fields’, written in 1915 by the Canadian physician Lieutenant-Colonel John McCrae. The poem was written after the funeral of McCrae's friend, Lieutenant Alexis Helmer who died during the Second Battle of Ypres.

Poppies were the first flowers to grow out of the ground on the battlefields where soldiers had fallen. Told from the perspective of a dead soldier, the poem references the continual growth of the poppies after the stricken have lost their lives.

The use of the poppy isn’t always straightforward. There is concern amongst some people that the symbol has been appropriated to justify patriotism and ongoing conflict, while others suggest the meaning has been lost on account of over-commercialisation.

Nevertheless, the poppy symbol has existed since 1921 and continues to be an important staple of war memorial in British culture.

In Flanders fields the poppies blow
Between the crosses, row on row,
That mark our place; and in the sky
The larks, still bravely singing, fly
Scarce heard amid the guns below.

We are the Dead.   Short days ago
We lived, felt dawn, saw sunset glow,
Loved and were loved, and now we lie
In Flanders fields.

Take up our quarrel with the foe:
To you from failing hands we throw
The torch; be yours to hold it high.
If ye break faith with us who die
We shall not sleep, though poppies grow
In Flanders fields.