Free Museums and Galleries in London

Experience London's top Museums and Galleries, all free to enter!

As well as being the capital of the UK, London is home to some amazing museums and art galleries. Today we’re bringing you 6 of the best, and what’s more – they’re all free!

All the museums and galleries in this list are easily accessible by public transport, and we have added directions for you, to make it easier.

The Museum of London tells the story of the capital from its first settlers to the modern day. It opened in 1976 and is home to the largest urban history collection in the world, with over 6 million objects.

There are displays on the Roman and Medieval London, the Great Fire, the Industrial Revolution, and London through the Blitz. The museum is even home to the cauldron from the London 2012 Olympic Games.

There are two cafés at the museum, serving snacks and drinks, as well as an indoor lunch space, which is open at the weekend.

The Museum of London is open every day, 10.00-17.00. Entry is free, but you should pre-book your visit online to guarantee entry. There are a limited number of tickets available on the door.

St. Paul’s and Barbican Underground stations are a 5-minute walk away. Directions can be found here. The Tate Modern is the home of Modern and Contemporary art in London. The museum opened in 2000, on the site of the former Bankside Power Station.

Featuring over 100 years of art from 1900 to the present, the Tate Modern has showcased art by artists like Pablo Picasso, Andy Warhol and Salvador Dali. The gallery also has several bars and restaurants, and you can even use a digital sketch pad to create your own art.

At the Tate Modern there is a kitchen and bar which serves food and drink based on art from the museum. It is also a short walk from South Bank, which has many food and drink options.

Southwark is the closest Underground station. The gallery is also a short walk from Blackfriars National Rail station. You could even take the Thames Clipper service and arrive on the river. Directions are available here. The British Museum originally opened its doors in 1759 and was the first national public museum in the world. The museum is home to a permanent collection of over 8 million works, one of the largest collections in the world.

The British Museum is dedicated to human history, art and culture, and features objects from around the world. The museum has many sections, including collections from Ancient Greece, China, and Japan. It is also home to the Rosetta Stone, which was used to first translate Egyptian Hieroglyphs.

The British Museum is open 10.00-18.00, every day, except the 24th-26th of December. Entry is free, but the museum recommends you book a slot in advance to guarantee entry.

The closest Underground stations are Tottenham Court Road and Holborn. Directions can be found here. 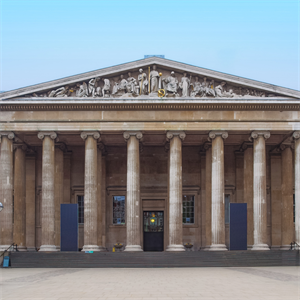 While this isn’t technically a gallery, it’s definitely worth checking out. East London is home to some of the best and most famous street art in the capital.

From local stars to world-famous artists, there’s plenty to see in the areas around Shoreditch and Brick Lane. Constantly changing and evolving, there’s often something new to see, so it’s worth doing again if you’ve already been. There’s even a Banksy piece hidden away – can you find it?

In the heart of East London, there’s a range of places to grab a bite to eat. Brick Lane is home to award winning curry houses, and even the oldest bagel bakery in the UK. There are also several street food stalls, and a range of independent retailers to check out.

The best starting point for street art in East London would probably be Shoreditch High Street Overground station. Directions to Shoreditch can be found here. Originally opening in 1852, the Victoria & Albert Museum (commonly known as the V&A) is the world’s largest museum of applied arts, decorative arts and design.

The museum showcases human art over the last 5000 years, and features works from Europe, Asia, North America and Africa. It is also home to the largest collection of Italian Renaissance works outside of Italy, and one of the largest Islamic collections in the Western world.

The V&A has two cafés. The main café was the first restaurant in a museum in the UK. The second café is located at the centre of the museum, where you can enjoy the hidden oasis of the museum’s garden.

The closest Underground station is South Kensington, which is a 5-minute walk away. Directions can be found here. The National Gallery is the UK’s third most popular museum. It’s current building opened in 1838, and is located in London’s iconic Trafalgar Square.

Works by Leonardo da Vinci, Claude Monet, and Raphael can be found amongst the gallery’s collection of over 2,300 paintings. The National Gallery is also home to Vincent van Gogh’s famous ‘Sunflowers’ painting.

The National Gallery houses a restaurant, as well as two cafés, so there are plenty of options for food and drink stops.

The gallery is open daily from 10.00-18.00, and booking is required, although tickets are free.

The closest Tube station to the National Gallery is Charing Cross. Directions here. If you want to learn more about London, and our English Centre in Greenwich, click here.